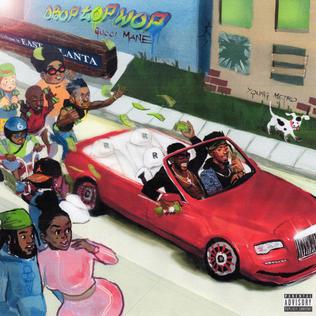 On Droptopwop, Gucci Mane links up with Metro Boomin to make one his most polished works yet. Droptopwop is precisely compliant with the flow and formula of Gucci’s classic mixtapes, but still somehow trumps the musicality of those tapes by a long shot.

From track 1, Gucci begins with his usual intro style, sticking to simple rhyme schemes and an almost mantra-like repeated list of what is “in the way.”

Guwop picks up the pace and intensity once the obligatory intro is over. Gucci is still one of the most successful rappers at re-packaging the same subject matter in each verse (drugs, street violence, killing Young Jeezy’s homeboy in ~self defense~, etc.) and making it sound brand new without feeling repetitive. Case in point: Guwop cites his $10 million estate on this tape multiple times, and it slaps every time.

Gucci two pistols, get robbed at the Crystals

Since returning from prison and very evidently changing his lifestyle, Guwop has truly been an example of “a different animal, but the same beast.” All of his newest releases have the same authentic Gucci (sans the wheezy slur of his heavier days), but with an added freshness. He addresses this in Tho Freestyle:

“Was damn near 300 pounds, but I lost the weight, though

People say they cloned me because I changed my ways, though”

But he quickly reminds us, that he may have 300 pounds of himself but he still has the same tough beginnings and street mentality to f*ck you up if you forget it.

“Gucci super cutthroat, but I was born broke though
Didn’t have a pot to piss, or window to throw it out, though
Niggas talk sideways, I hit him in his mouth though
Who you think you talking to? I had to stomp ’em out, bro”

And, as should have been expected, Metro Boomin added much substance to the production, while still upholding Gucci’s style. One would think this is an easy feat, but it’s a mark that has been missed before (see: DJ Mustard’s uncomfortable attempt to step outside of his tempo with Gucci on ‘Cali ft. Young Scooter’ from Diary of a Trap God.) Throughout the tape Metro drapes his synthesizers and keys over the bass and drums, creating a dark, almost suspenseful sound. The best example of this, to no surprise, is on “Dance with the Devil”. On that track, Gucci raps about the material things that lure people into “dancing with the devil” to obtain them.

And Metro paired the dark lyrics perfectly with horror film quality chimes lurking in the background. But, a criticism must be drawn at the nearly indistinguishable similarities of that beat and that of the immediate following track Both Eyes Closed. I would have liked more variation there. In general, the tape could have benefited from less of the chime and high key melodies, about half of all the tracks have only slightly altered versions of those same chimes.

Another production critique I have is the length of build-up in many of the songs. Now, sitting through 30 seconds of ad libs or waiting 25 seconds to even hear Gucci’s voice makes sense for the Intro or for the laid-back tracks like Both Eyes Closed. But the sturdier bars in songs like Dance with the Devil or Tho Freestyle could have sounded harder and more poignant had Gucci started spitting right from the go.

Overall, Droptopwop is lean and concise. Gucci and Metro wasted no songs on the tracklist, every song being a banger in its own right. And most impressively, they wasted no features. Offset, Rick Ross, 2 Chainz, and Young Dolph did not take their verses lightly. Particularly Offset, who took advantage of his lengthy feature on Met Gala, spit some rapid-fire bars and threw a jig-worthy hook on the bass heavy beat. Gucci Mane keeps making it clearer and clearer that he is indeed the Trap God.

← Welcome.
Master of Coming Out at Waffle House →